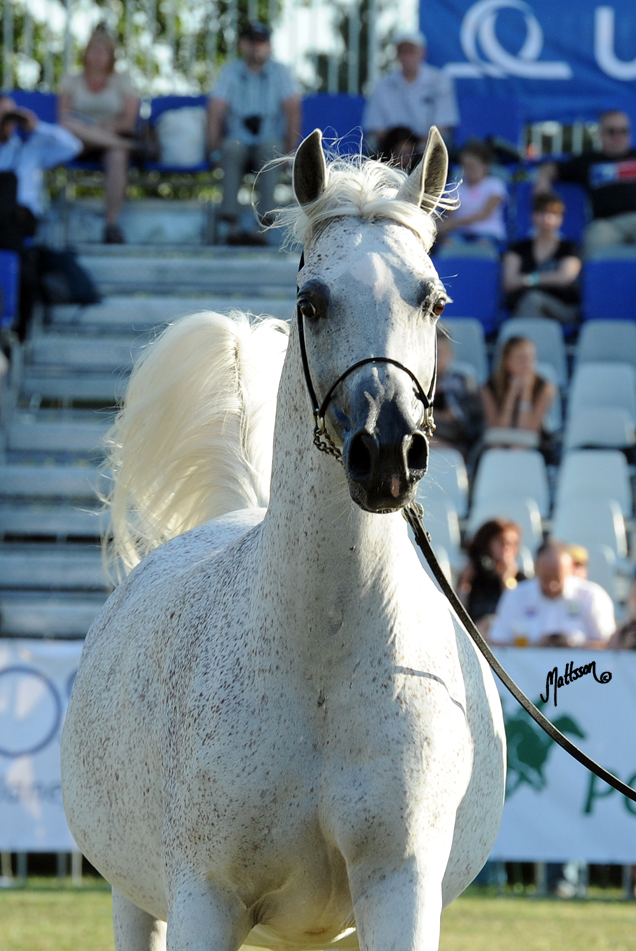 Poland is famous for their white great moving mares and I can tell you that watching the Polish National Show will give you the opportunity to see several of them and it is nearly impossible to predict the future champions prior to the show!

At the 2013 National Show a particular flea-bitten mare would steal the whole show when she came into the ring shown to perfection by Piotr Dwojak. This very special mare is named Norma and without the gracious gift from an American breeder she would not have been here. 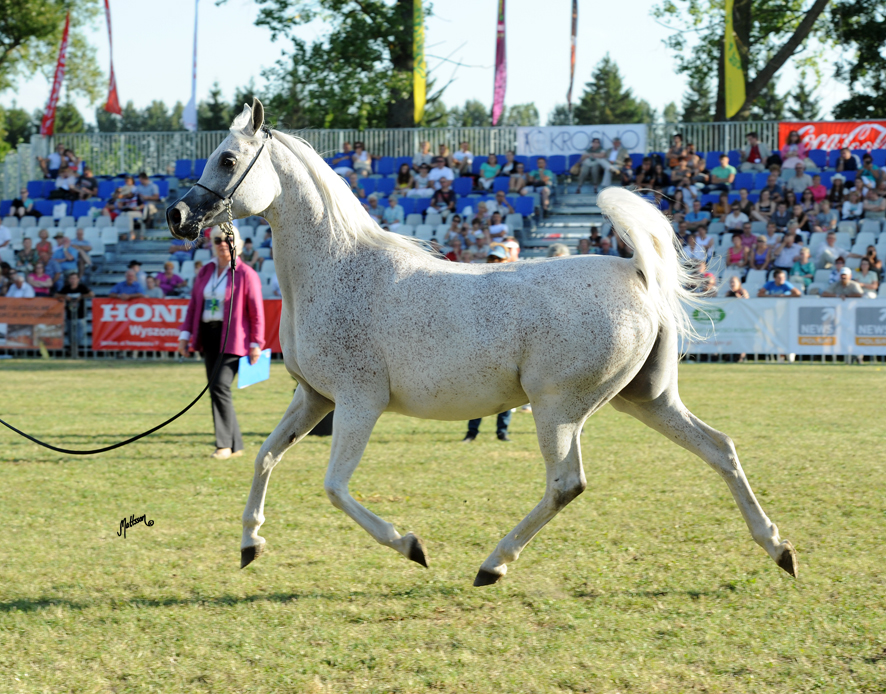 Norma was born on the 22 of February 2004 and she was the first foal out of the Monogramm-daughter Nina and with Norma Michalów now had the mare that would carry on this branch of the Sahara dam-family. 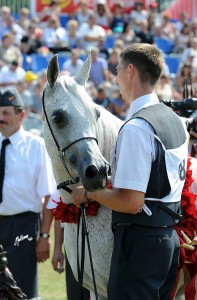 When the first mares came to Michałów 60 years ago, three representatives from the Sahara dam family was brought into the breeding program – Epizoda  (Trypolis x Pieszczota), Mokdiara (Hadjar x Mokka) and Westalka (Haszysz x Legenda). The only family of these three represented today is the family of Epizoda continued through her daughter Daszawa (by Nabor) and her daughter Debiça (by Elf). In 2013 Michałów has five mares descending from Debiça.

Another Sahara-descendant but from another branch of the family was the mare Karramba (Witraz x Karmen II). She was bred by Albigowa Stud in 1951 and was later sold to Patricia Lindsay in 1958 as one of her first Polish acquisitions. Karramba would be an influential mare in UK as the dam of several great mares including Krysia (by Rushti), the dam of British National Champions Rishenda and Zircon Karisma, both by Donax. Karramba is also the dam of the stallion Karadjordje (by Gerwazy) who was exported to USA. 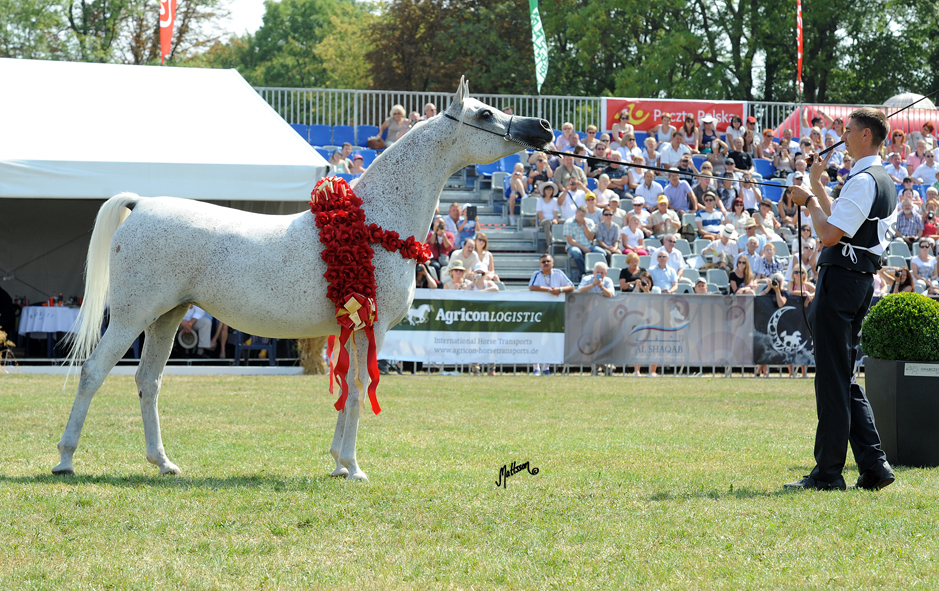 Karramba was in foal to Faher when Patricia bought her and the resulting foal was Kochana. As a two-year old filly Kochana was exported to Virgil and Estelle Hook in USA and later on she had the filly Kirkors Gazal in August 1971 by Polish-bred Kirkor (Gwarny x Carmen). In 1976 Kirkors Gazal was sold to Wayne Newton and on the 19 April 1977 she foaled a grey filly by Nabor that was named WN Nastasea. As a three-year old WN Nastasea was sold to Tom Chaunceys Desert Arabians. 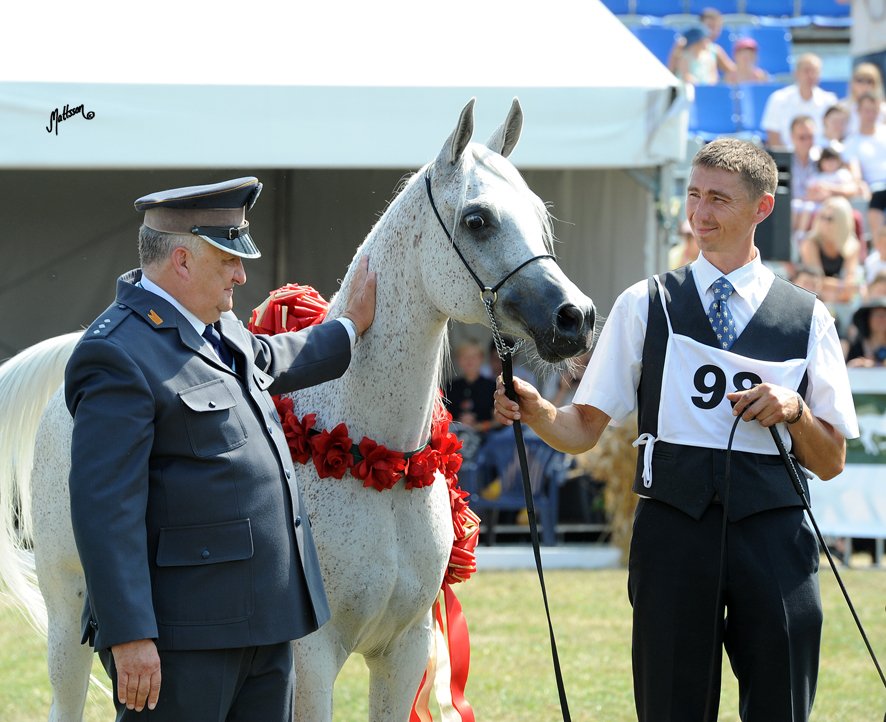 In 1990 her current owner Dorothy A Wrigley decided to gift this daughter of Nabor to the stud farm where Nabor had been so influential and produced so many great horses – Michałów State Stud. WN Nastasea arrived to Michałów and by this a new branch of the Sahara dam-family was incorporated into the breeding program. WN Nastasea was not a handsome mare but Michałów has with every generation made an improvement and it is impressive to see her granddaughter Norma, this feminine mare with tons of attitude and great movements and charisma – in only two generations!

WN Nastasea had a total of three offspring in 1993-1995 at Michałów – Nadia (by Endel) who was sold to a private breeder in Poland, Norman (by Monogramm) was sold to Spain where he has been Majorca Senior Champion Stallion and finally Nina (by Monogramm). Nina was a rather small, white mare and she had five offspring in Poland before she was exported, three colts and two fillies. Nomia (by Al Maraam) was sold in October 2010 as a two-year old and Norma was retained by Michałów as a brood mare. Norma has so far three offspring, Autumn Show Junior Top Five Stallion Nomad (by Eden C), Norbert (by Gaspar) and the yearling filly Nona (by Esparto). And I am certain that we will see many more great horses coming from this family, descending from the stunning Norma.