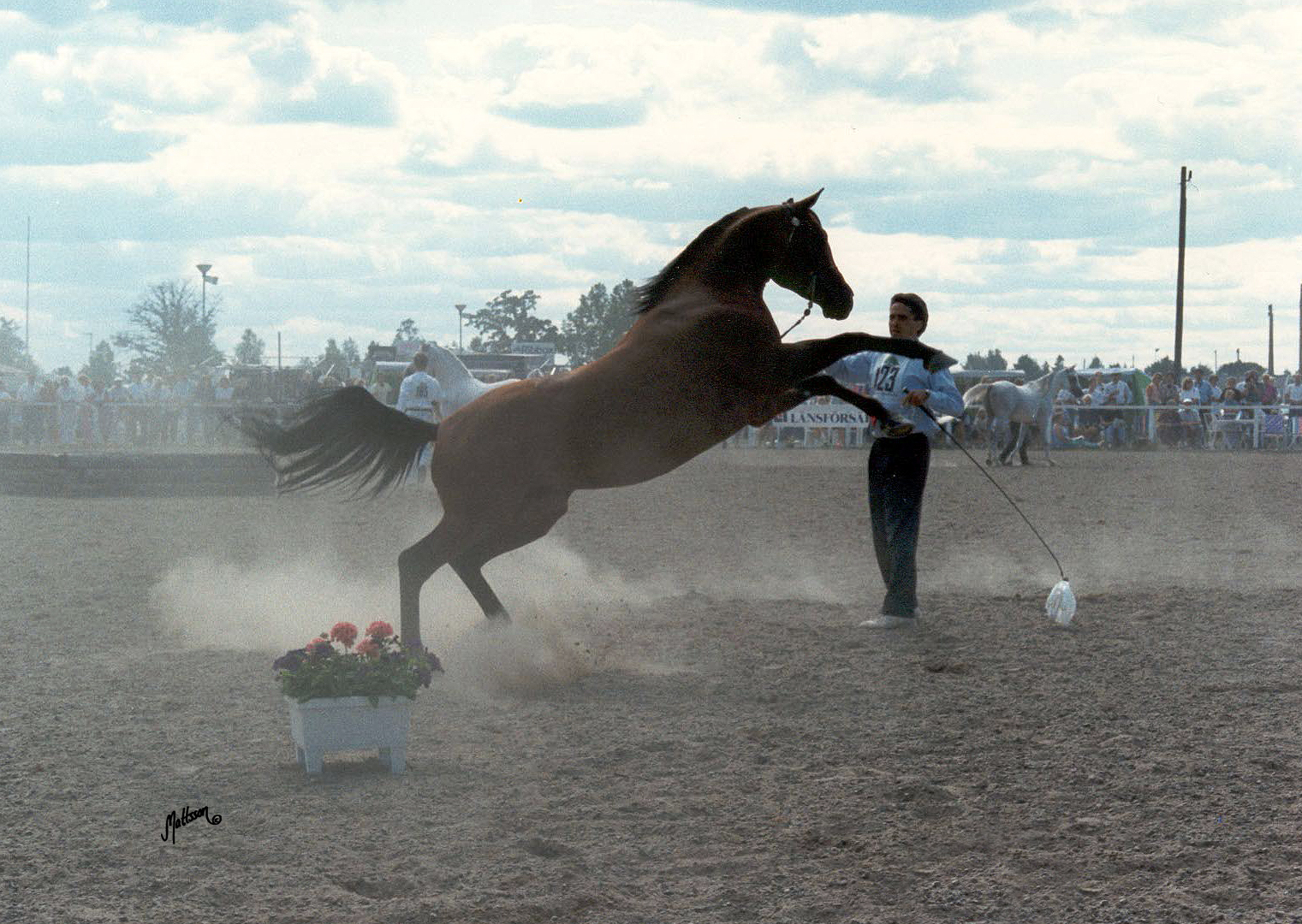 It is a hot Swedish summer day in 1989 at the Swedish National Show and we are at Elmia in Jönköping. Everyone is waiting for the first stallion class to begin and 22 stallions aged 4-7 years old are eager to be shown. The first stallion entering the ring is full of confidence and with an attitude that shout – Here comes the King! And indeed he did – Casino – shown by Michael Byatt.

Casino was bred in 1982 by Countess Penelope Lewenhaupt. He was from the first foal crop by the Russian bred stallion Mamluk (Aswan x Monogramma), a maternal brother to Monogramm (by Negatraz). Mamluk was imported to Sweden from Holland by Cecilia and Hans Bourghardt, Aspenäs Arabians, in 1981 after they found him at a riding school. Mamluk was later leased by Michalów State Stud in 1985 in exchange for the Polish National Champion Haracz (Palas x Harmonia), who was shown to the title 1985 Swedish National Champion Stallion, also by Michael and it was an amazing presentation that I will never forget.

Casino´s dam was the great mare Cantata (Laur x Canaria). Her dam Canaria was born at Janów Podlaski in 1942 by Trypolis (Enwer Bey x Kahira) out of Saga (Hardy x Jaga II) and is one of the most influential mares in Poland as the dam of Gwara (by Wielki Szlem), Celebes, Cosmosa, Karmin and Caliope (all by Witraz) and Czatanoga (by Anarchista). In 1962 Canaria was sold to Dr. Arvid Aaby-Ericsson in Sweden and she was heavily in foal to Litaur (Duch x Laguna). The resulting foal was a bay filly, Cantata and she was sold to Countess Lewenhaupt where she would spend her whole life producing 15 foals. Cantata is the dam of the stallions Abukir (by Genaro), Bataan (by Banat) exp. USA, Zadir (by Zareef), Carradin (by Aladdin) exp. USA and Casino.

Canaria was sold to Erik Erlandsson (the breeder of Aladdin) in 1962 as his first Arabian mare. It would not be the best deal he done as he never got her in foal.

Casino was sold to Aspenäs Arabians as a foal and he sired about 30 foals in Sweden.

Casino easily won his class that day at Elmia and he was named Swedish National Champion Stallion.