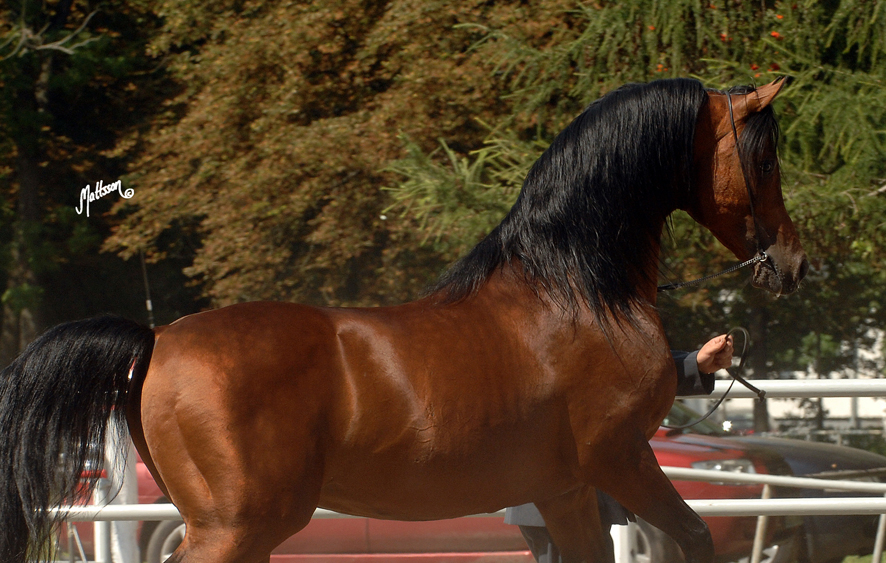 Some horses will make an impression on you that will last a lifetime and for me that horse is Ganges. For me he is an example of the perfect stallion – he won at the Racetrack, he won in performance and he won in the showring. He has the greatest disposition and he is strong and correct. All those features are great, but even greater is that his offspring inherit those features, over and over and over again. And for me, THAT is the proof of a great stallion, a stallion that will matter for the breed and that will be remembered not only by people like myself that love them for who they are, but also by breeders in the future that will value them for what they have passed on and for bringing the breed forward. And Ganges is definitely one of those. 20 years ago, on the 6th of April 1994, this wonderful stallion was born at Michalów stud in Poland and today we celebrate his 20th Birthday. Happy Birthday beautiful boy! 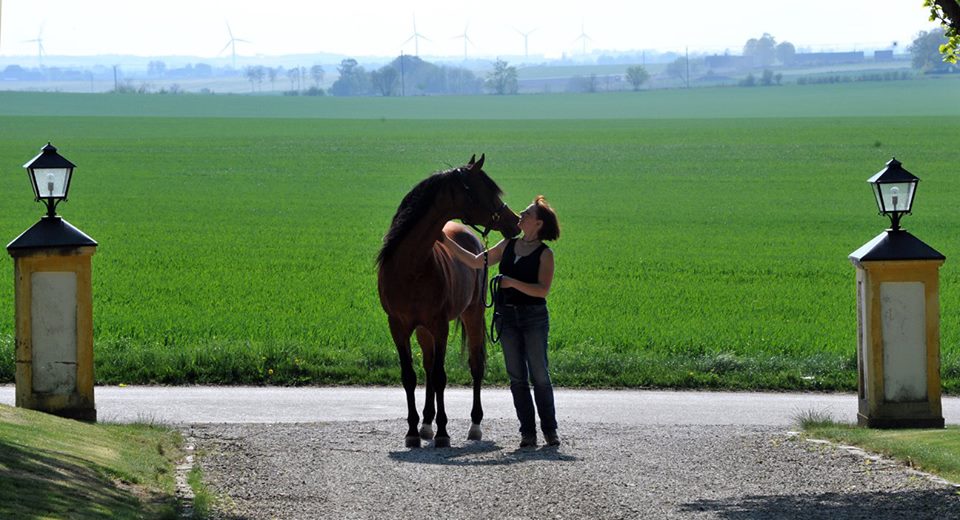 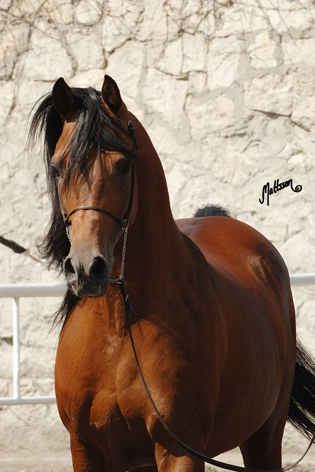 Ganges was born in the first foal crop by Monogramm (Negatraz x Monogramma) at Michalów stud in Poland and everyone had high hopes in this bay colt from the start. His dam Garonna was by Fanatyk, a son of the 1982 Polish National Champion Stallion Aloes (Celebes x Algoa) and out of the beautiful white mare Fatima (Negatiw x Fatma). Garonna´s dam Gizela was a daughter of Palas (Aswan x Panel) and out of the bay Gilza (Espartero x Gastronomia). Gilza was an amazing producer and she had 13 foals before she was sold to Weatherford Farms in USA at the age of 20. She had a foal every year except in 1974 and 1986 producing 9 daughters and 4 sons. She is the dam of the stallion Gorset (by El Paso), the famous Palas-daughters Gizela, Giemza and Getynga, the beautiful Eskimos-daughter Gitana, beautiful Gasawa (by Probat) and the great producing Grenada (by Set). Gizela was born in 1977 and she had 12 offspring between 1983-1995 and she was just as great producing daughters as her dam, Gizela had 9 daughters and 3 sons. Her most famous daughters are the Monogramm-daughters Georgia and Gehenna, the Probat-daughter Gaskonia and the two Pepton-daughters Geneza and Giza. And of course the bay Garonna, who was named Polish National Junior Reserve Champion Mare. Garonna had 5 offspring in Poland before she was sold to John Blincoe, a breeder from USA that tried to buy Ganges at young age but the answer was simply that he was not for sale. 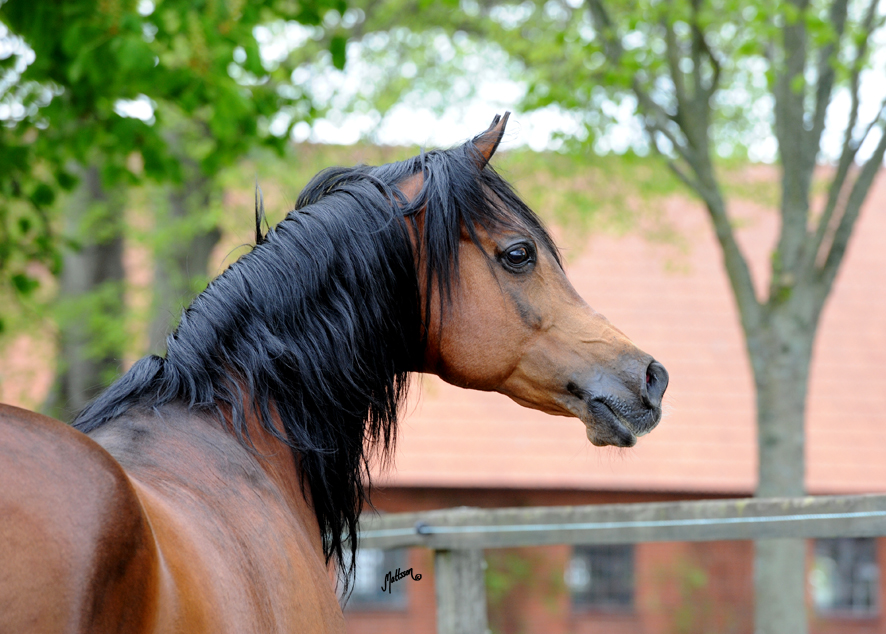 Ganges was Polish National Junior Reserve Champion Colt in 1995 and 1996. He was then sent to the racetrack and raced for two seasons with 16 starts, 3xI (Koheilana I St.), 3xII, 6xIII (Bialka St.), 1xIV. 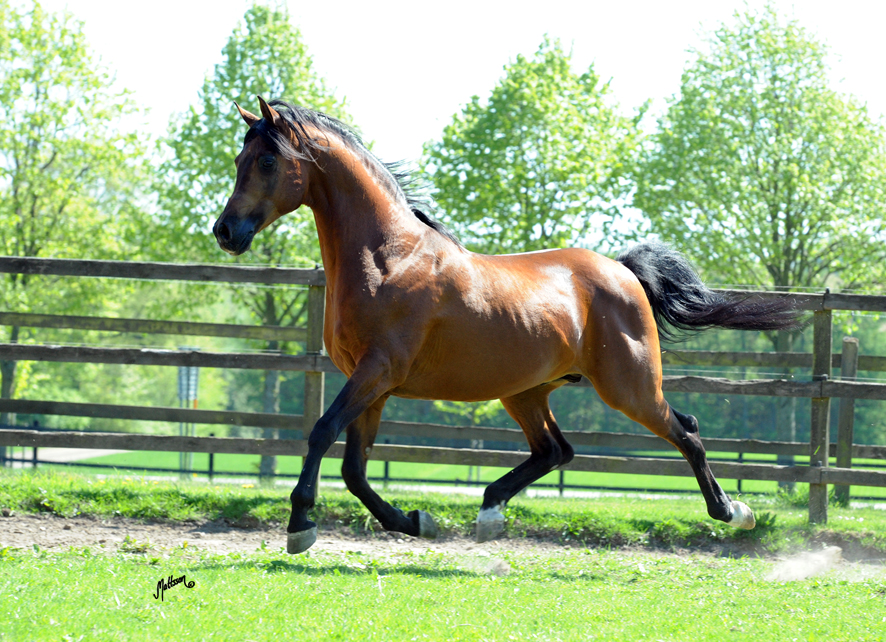 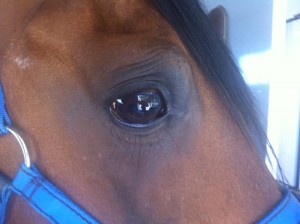 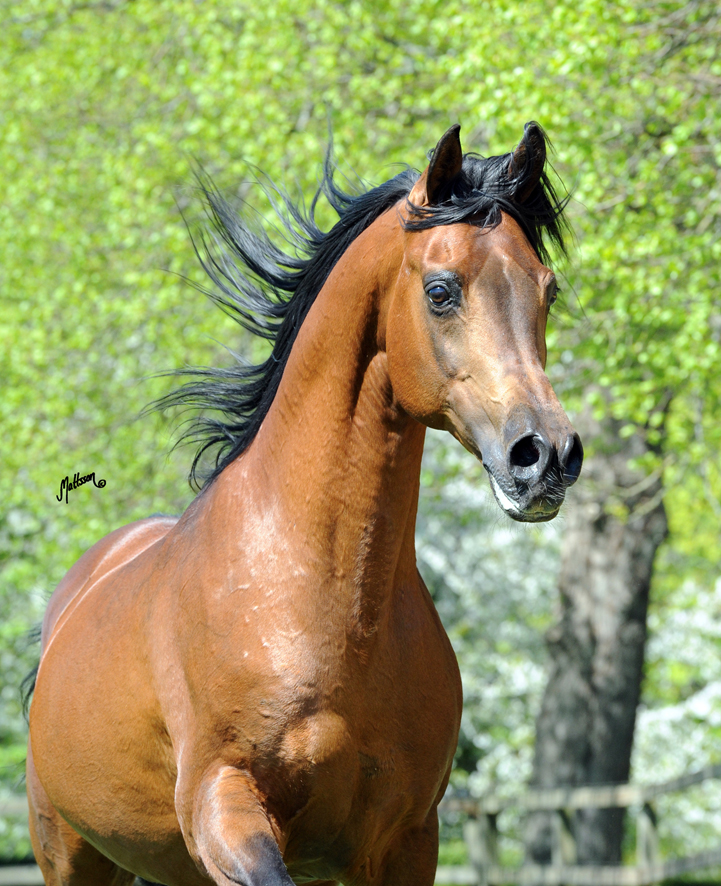 Almost a year ago, on the 8th of April, I had the great honour to drive down to Michalów and pick Ganges up and bring him to Sweden. He was on lease to Sinus Arabian Stud for 3.5 months and we were thrilled to have this unique opportunity to stand this great stallion and breed our mares to him – a leading sire of racehorses, and a great sire of show and performance horses. 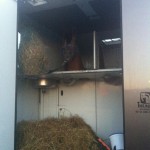 After some waiting for all the paper work to be done on the 9th we loaded Ganges on the lorry and it was an amazing feeling when I left Michalów and headed towards Sweden. Talk about road-trip – me and Ganges driving through Poland, Germany, Denmark and finally Sweden!

It was an uneventful trip until we were on the ferry between Rostock in Germany and Gedser in Denmark. The ferry would take just 2-hours but after barely 30 minutes we run into a pretty bad storm and it was hard even to stand still. Ganges is a very calm horse to transport but at this point he was really scared and I was standing with him putting his head in my arms and we both were hoping that the sea would calm down. After about 10 minutes the alarm went off and some truck drivers left the car deck and went upstairs. I do not scare easily but it was not a nice situation and I could not help thinking why the alarm went off… was it because of a fire or were we about to sink…? All I knew was that I would never leave Ganges so I kept looking at my watch and counting down… 55 minutes to Gedser, 50 minutes to Gedser… When the alarm went off for the second time I started to wonder when I would have to unload Ganges so that we could escape through the emergency exit… when I could smell the smoke or see the water that would come in…? 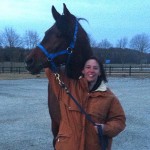 Both Ganges and I were relieved when we finally arrived to Gedser and could continue our drive up to Sweden. At 5am we arrived at Stall Lunnarp and I unloaded Ganges and walked him for a while before I brought him into his new stall. Talk about a magical moment to stand on Swedish soil holding Ganges while the sun was rising. 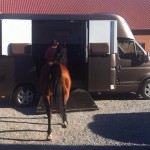 Ganges bred 11 mares in Sweden before it was time for me to bring him back to Poland. In the evening on the 24th of July I loaded him onto the lorry to begin the journey back to Michalów. This time the ferry was uneventful and the whole trip went great. It was with mixed feelings I unloaded him at Michalów and handed over the lead-rope to Piotrek. I will be forever grateful for the amazing opportunity to have him in Sweden and I am thrilled by his coming foals. So far 5 of them have been born, 3 colts and 2 fillies and they are all that we hoped for. My two Ganges-foals are not due until the end of May and I can not wait to see them. 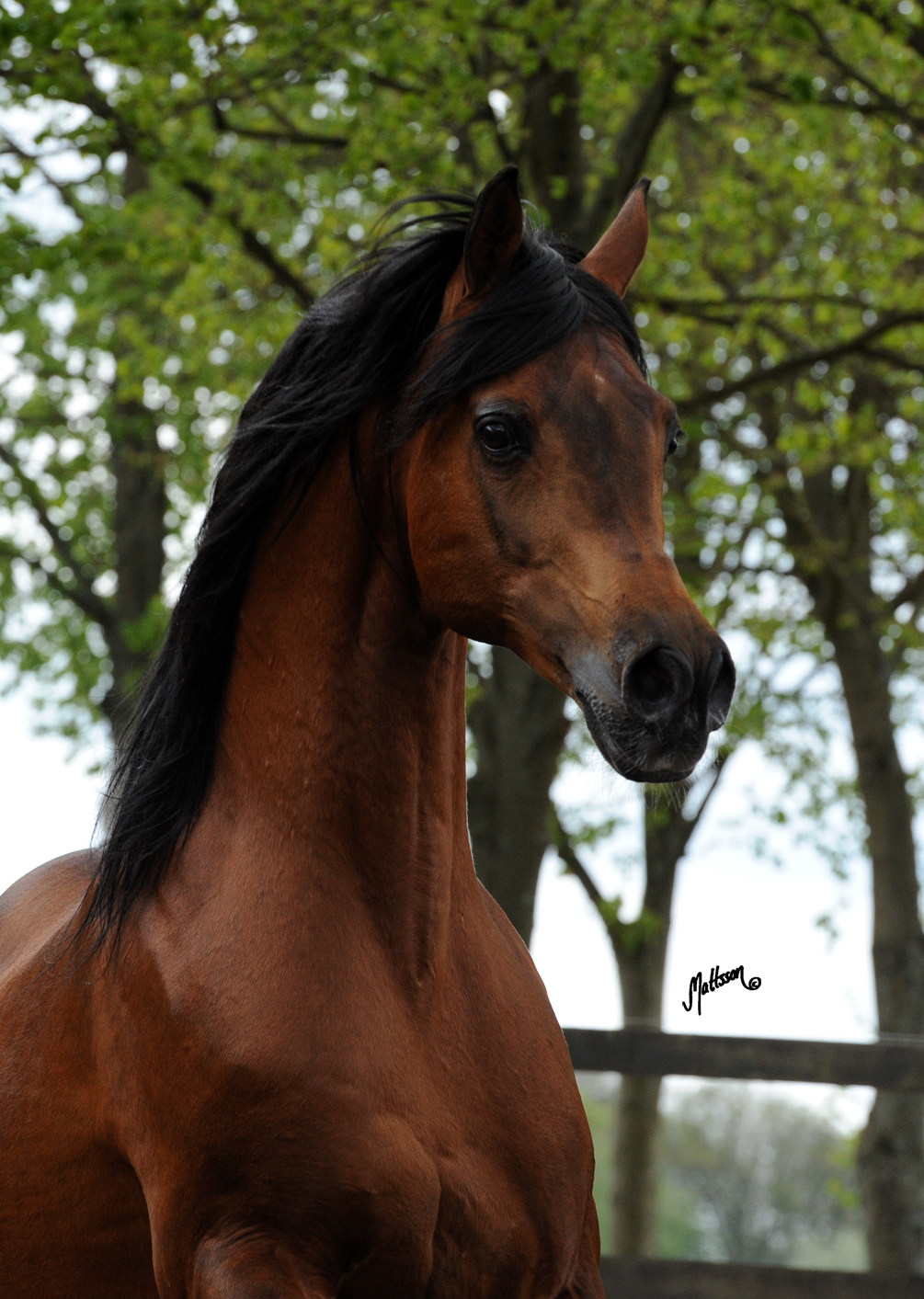 Ganges is a great contribution to the breed and it is very clear when you see his sons and daughters over the world producing and performing and continue his legacy. Happy Birthday Ganges, you are one in a million! 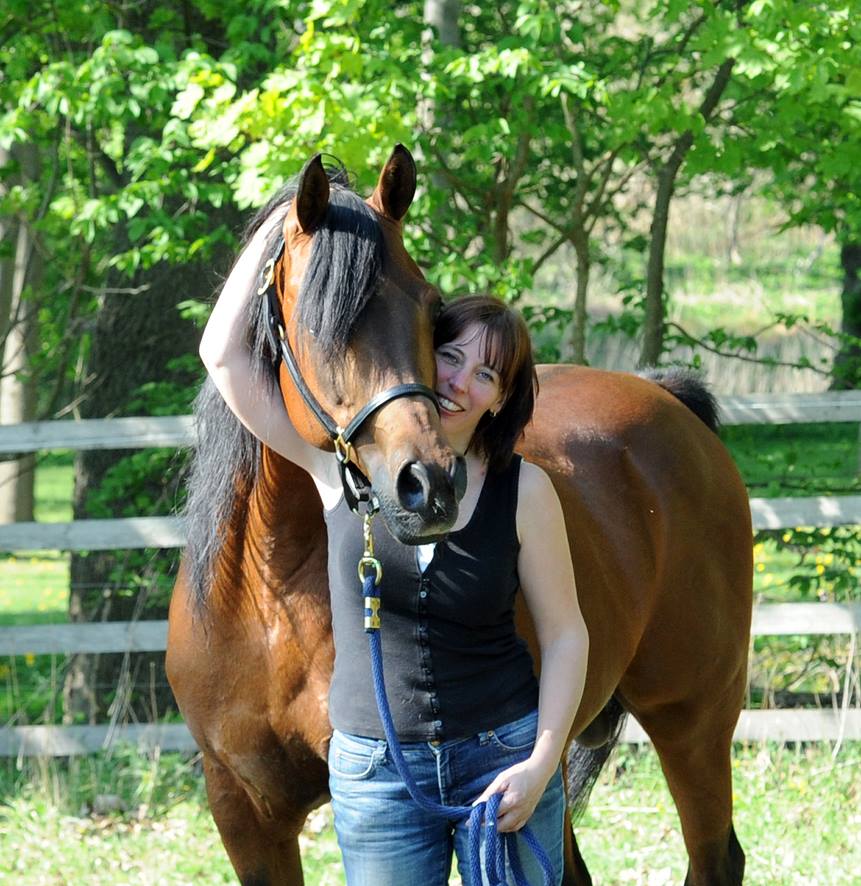