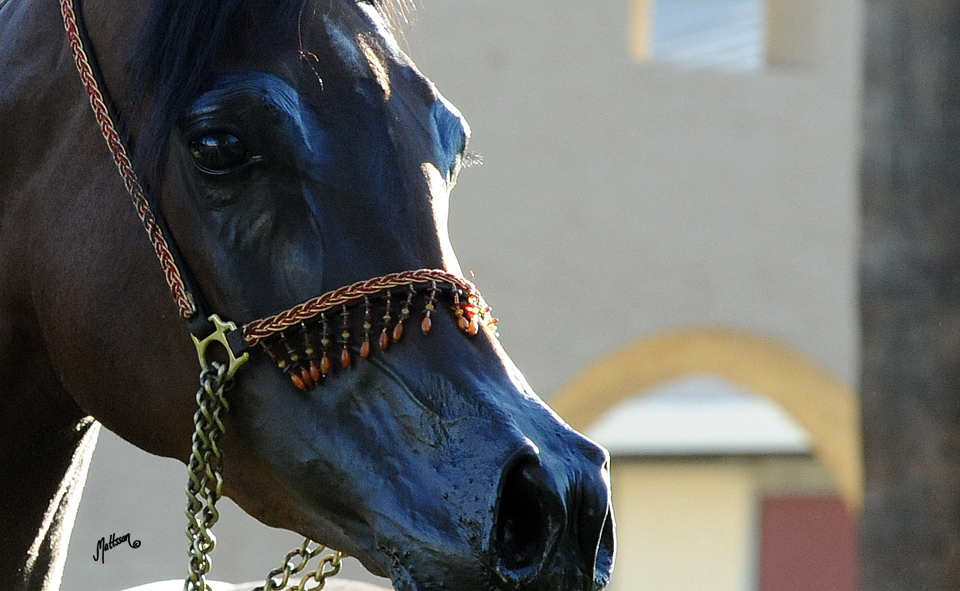 Today, the 3rd of February, is the Birthday of a very dear friend of mine – Happy Birthday Janey! We share the love to a very special mare – Wieza Mocy – and Janey has the honor to be her caretaker. This blog post is my special gift to you Janey – and this my dear is a closer look at the family of our beloved Wieza Mocy.

There are some horses that are born special and Wieza Mocy is one of those special horses. And knowing her pedigree it is no surprise that she would be special as she belongs to the family of the beautiful bay Comet-daughter Warmia. Warmia was an incredible producer leaving 11 offspring – 3 stallions and 8 mares. Her three sons were all used in breeding – Wandal (by Negatiw) in USA and Woroblin (by Gedymin) and Wermut (by Probat) both in Poland. Warmia produced 2 daughters by Gwarny – Widawa and Wokanda, 4 daughters by El Paso – Wizja, Wistula, Wersja and Wilejka and 2 daughters by Bandos – Wacpanna and Weczera.

Warmia’s first daughter by El Paso, Wizja, was leased to USA to promote her sire who was on lease to Lasma Arabians and he was named 1976 US National Champion Stallion. In 1977 Wizja was named US National Champion Mare and she produced the sons Wizjon (by Bask) and Warranty (by Aladdin) before she returned to Poland in foal to the Bask-son Cognac. She produced the son Winiak in 1983 and he was sold as a gelding, in 1986 she had another son, Wizjoner (by Set) and in 1987 she produced the chestnut stallion Wigwam (by Probat), sold to Sweden. Wizja had health problems and leaving only sons the danger was that she would not have a daughter to carry on her beauty and legacy. Finally in 1988 Wizja had a chestnut filly by the Russian stallion Tallin (Nabeg-Talantlivaia/Aswan) – Wizjera and then she had two fillies in 1990 and 1991, both by Arbil (Banat-Arba/Comet) – Wiza and Wiazma. Wiza was sold at the Polish Prestige-auction in 1993 while both Wizjera and Wiazma was retained by Michalów to replace their famous dam.

I will never forget the first time I saw Wiazma. My all-time favourite mare has always been Wizja, she was so beautiful even standing in her stall as she had that special aura and the biggest eyes I have ever seen. I knew that Wizja had a filly in 1991 but I had not seen her when I came to Michalów in August 1992. After the Breeding parade everyone walked down to the cars to leave for Warsaw and I was left alone walking through the barns. I love walking through the barns with the young horses and usually I look at the horses one by one and when I see a horse that get my attention I look up at the pedigree. I was looking at the yearling fillies and suddenly a dark brown filly without markings turned her head and look at me with huge black eyes and she got me there and then. I looked up and was not even surprised when I saw that it was Wiazma, the daughter of Wizja. I asked Mariusz Liskiewicz if I could see her outside so he brought her out for me to take a couple of photos and to look at her up close.

Wiazma was a filly with a lot of attitude and extraordinary movements. She was amazing when she trotted into the ring and she was named Polish Spring Show Junior Champion Filly in 1993.

She was raced as a three-year old with 3 starts (2xII, 1xIV) and then she was bred to Monogramm producing a bay filly named Workuta. Workuta was sold to the Polish private breeder Stanislaw Redestowicz and later to another private breeder Tomasz Tarczynski. She is currently owned by Manny Vierra, Valley Oak Arabians in USA.

Wieza Wiatrów had the same beautiful colour as her dam and the same confidence and movements. She won her class at the Polish Nationals in 2002 and went on to be Polish National Junior Reserve Champion. It was quite a chock for the whole audience when it was announced that there was a surprise addition to the Pride of Poland auction… lot 0 was going to be Wieza Wiatrów! She became the high-selling lot when she sold for $220.000. She has been a great producer for Al Khalediah Stables in Saudi Arabia as the dam of mares Muhat Al Khalediah (by Padrons Psyche) and Shammaa Al Khalediah (by F Shamaal) and I am happy for Al Khalediah but I would have loved for her to have had a couple of foals in Poland before she was sold…

Wieza Babel produced 6 daughters at Michalów Stud before she was offered at the Pride of Poland in 2011.

Among her daughters Wieza Róz (by Ekstern) was the 2009 Polish National Junior Champion Mare as a yearling. Wieza Róz is now owned by Al Thumama Stud in Qatar.

Wieza Babel was sold to Hélène Zaleski of Lutetia Arabians in France and she produced a colt in 2012 by Esparto, Wesper, a very promising bay colt who is currently in race training in Poland.

Wiazma was bred to Ekstern and produced the brown mare Wieza Marzen in 2002. She is not the most beautiful of Wiazma´s daughters but she has the best breeding record of them all. Wieza Marzen was raced with 4 starts (1-2-0-0) as a three-year old before she was bred for the first time.

She had foals by Al Maraam (Imperial Imdal-The Vision) in 2007 and 2008, the filly Wieza Maraam and a colt Wiezowiec (he was later gelded and sold). Wieza Marzen was one of the mares that were bred to the young superstar QR Marc (Marwan Al Shaqab-Swete Dreams) in 2008 and she had a beautiful filly in 2009 named Wieza Marc’a. She was bred back to QR Marc and in 2010 the great Wieza Mocy was born.

Wieza Marzen has also had great offspring by Abha Qatar, a filly in 2012 named Wieza Bajek and a colt in 2013 named Wegrzyn. Last year she had another filly and this time by another Marwan Al Shaqab-son, Kahil Al Shaqab, and I would not be surprised if we will see Wieza Nimf in the show ring this summer.

Wiazma was sold at the Pride of Poland auction in 2007 to Paul Gheysens, Knocke Arabians in Belgium. Her daughters and granddaughters together with Wizjera’s progeny (that I will present in the next blog post) is a strong family at Michalów and Wizja will live on through all of them.

Wieza Marc’a had her first foal in 2014, a dark bay filly by El Omari – Wieza Marii. She was bred to Vitorio TO and sold at the Pride of Poland auction to Sinus Arabian Stud in Sweden for 70.000 Euro.

Wieza Marc’a was only shown a couple of times as a young filly and then shown for the first time as a Senior mare by Glenn Shoukens at the All Nations Cup in 2016. She received 92.64 points and was awarded with the Crowd´s favorite award in her class.

In August 2013 life would change a lot for Wieza Mocy when Janey Morse of Oak Ridge Arabians and David Boggs of Midwest Training Center in USA came into her life. During their visit to Michalów in August a lease arrangement was made and Wieza Mocy was to come to USA for two years while Janey´s stallion Vitorio TO (DA Valentino-Sol Natique) came to Poland.

Wieza Mocy made her show debut in USA at the prestigious Arabian Breeders World Cup in Las Vegas and it was amazing to see her magnificent entrance shown by David.

She would not only impress Janey and myself, the whole crowd and the judges loved her and she went back home with the highest score of the show and the title of Arabian Breeders World Cup Senior Gold Champion Mare!

It was such a great moment to see Janey walk Wieza Mocy out of the ring after the price ceremony with David and Dagmar walking next to her waving the Polish flag.

Wieza Mocy was also shown to the Region VII Champion Mare title, Arabian Breeders Finals Senior Champion Mare and then she ended the season with the title US National Champion Mare – 37 years after her great granddam Wizja was awarded with the same title. 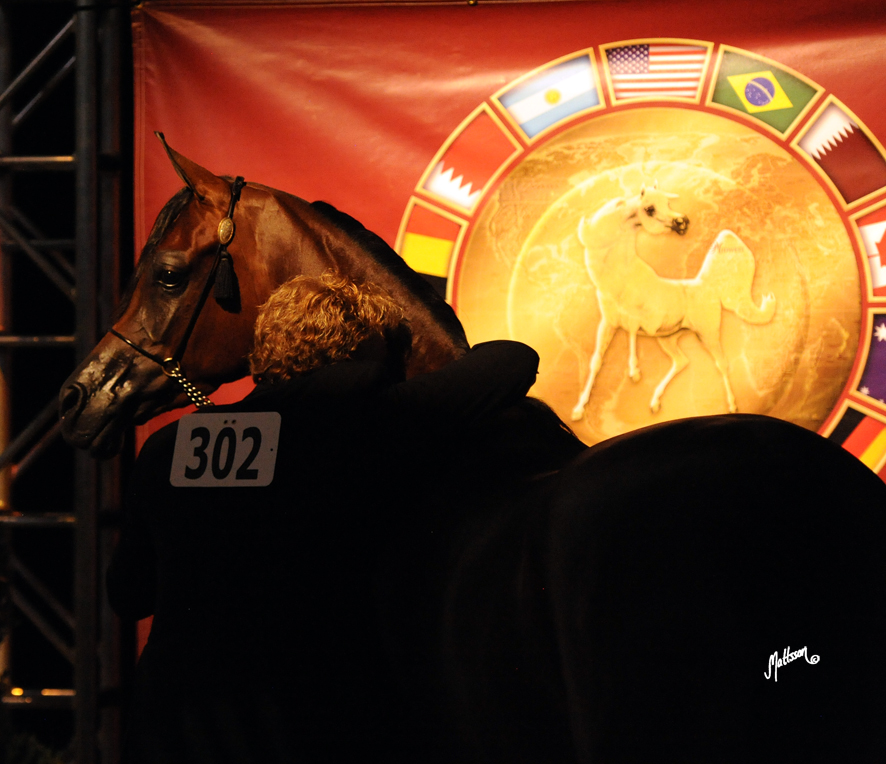 Wieza Mocy’s first foal was born at the end of January, a pretty filly by Pogrom. The filly is bred and owned by the Ames family, Cedar Ridge Arabians. I am so excited to see Wieza Mocy´s offspring born in the USA!

Wieza Mocy is an amazing mare tracing down from a line filled with great mares. And she is not only beautiful but a great personality and as all the mares in this family she really knows her value. I am so happy for Janey to have this amazing adventure with such a once in a lifetime mare and it is not over yet, I can not wait to stand by the rail with you Janey cheering for our spectacular Polish girl in Scottsdale! Happy Birthday my wonderful friend! 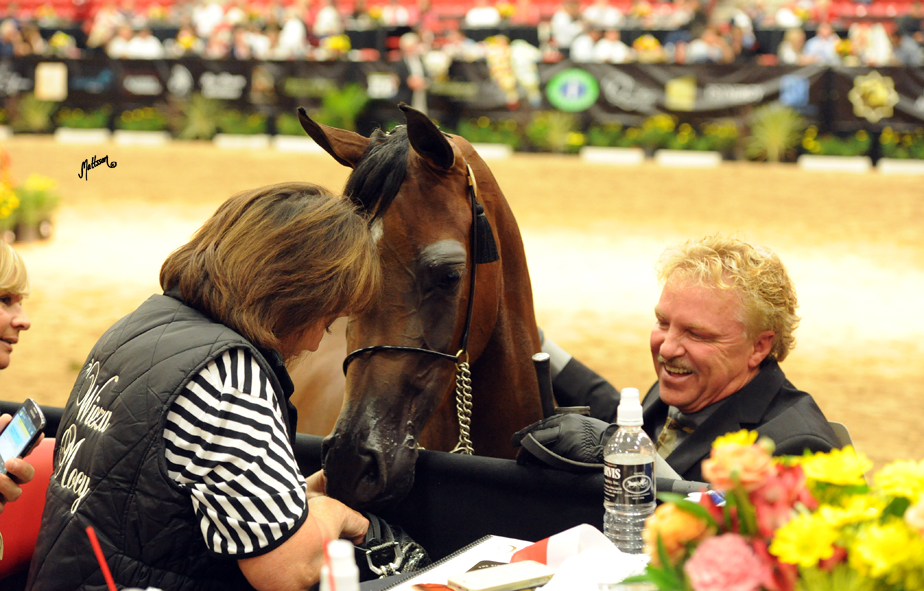