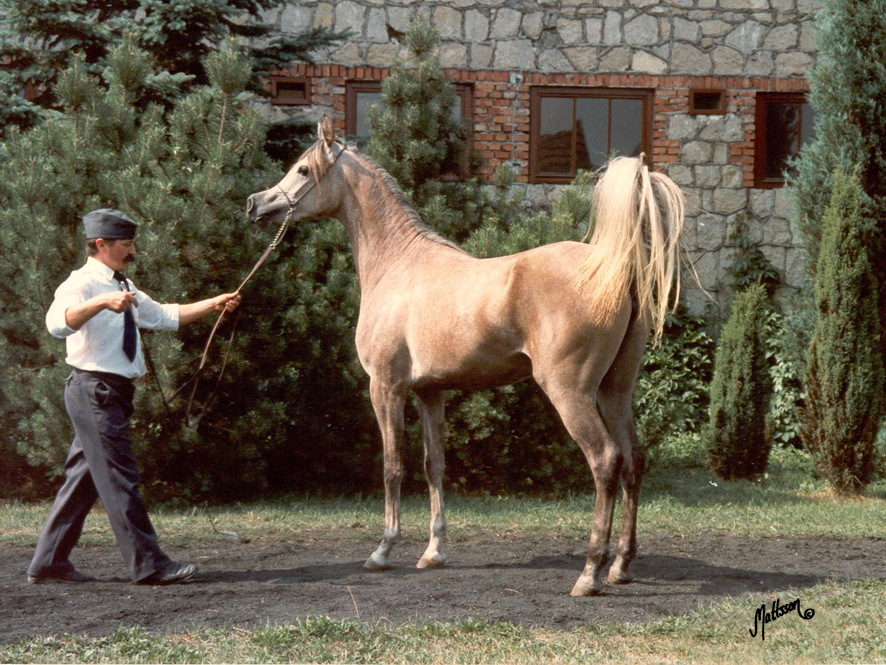 There are some horses that make a huge impression on you and they will always be with you. Emandoria, Pianissima, Etruria, Emigrantka and Algeria are some of the mares I have met that blew me away. All of those amazing mares have also impressed lots of other people around the world and they are all with us through their offspring and their descendants. But not all the amazing horses have the chance to show the world what they are able to do and one of those truly spectacular mares was born at Michalów State Stud in 1990… This grey filly was something really special with a head so extreme that I never had seen anything like it before.

This precious filly was named Estarda and her dam was the lovely Palas-daughter Estancja. Estancja was out of Espada (Aquinor x Eskapada/Nabor) who was the US Top Ten in 1978 when on lease to Mike Nichols and Don DeLongpre in USA.

Espada returned to Poland in foal to Phazon (Ferzon x Phleta/Raffles), a stallion of Crabbet bloodlines and with 7 crosses to Skowronek. The resulting foal in 1982 was not one of Espada´s best, a filly named Etika, and Etika was sold after producing only one foal in 1987, a filly by Penitent. Espada was bred to Palas and produced Estancja in 1983.

Estarda´s sire was Gadir, a grey stallion born in 1977 bred by Eleonore Hussman. He was Danish, Norwegian and Scandinavian Open Champion Stallion as well as European Reserve Champion. Gadir started his breeding career in Denmark and was later on lease to Michalów in 1989-1990. He bred a total of 24 mares during the two seasons which resulted in 17 weaned foals. Gadir´s sire Saudi was born in 1970 at Blommeröd Arabian Stud and he was by the Swedish National and European Champion Stallion Dardir (Nabor x Darda/Amurath Sahib), the full-brother to the great Triple Crown-mare Dornaba (1966 Scottsdale Arabian Show Champion, Canadian National Champion and US National Champion Mare). Saudi´s dam Sake (by El Trypoli) was bred by Janów Podlaski and imported to Blommeröd in Sweden at the side of her dam Sakla (Amurath Sahib x Saga/Hardy), the full-sister to Estokada. Sake and Sakla have created a dynasty in Sweden like Estokada did in Poland, the most recent success has been the International success with the Blommeröd-bred mare Magora (Gazal Al Shaqab x Margotka/Algorytm), now owned by Al Khalediah Farm.

Estarda was shown as a yearling and was named Polish National Junior Champion. She was just as much talked about as Pianissima would be a decade later, she was just something that no one ever seen before. I remember her as a two-year old when they brought her outside the stall for people to look at her and photograph and the main concern for people was “can she really breath”. As a 3-year old Estarda was bred to Monogramm and produced the colt Estardos in 1994, the year after another colt was born – Erdos by Grandorr. In November Estarda was shown at the European Championship and she was named Reserve Champion and I recall the photos of her afterwards showing this exquisite mare shown in her winter coat and people were stunned by her beauty.

We can only imagine what she would have looked like as an aged mare but it was not meant to be as she died way too young in 1996. But all of us that saw this amazing mare cherish her memory, she was like a fairytale horse and she will stay in my memory forever with those other special horses that cross my path…