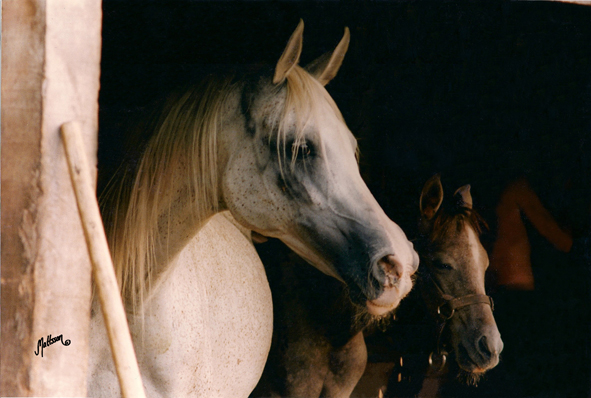 One of my favourite moments when I am in Poland is to walk through the barns to watch the mares and foals, to visit my favourite mares and to see the new foals of the year. Or to walk among the young horses, where you can see all the yearlings and two-year olds lined up according to their sires, a great way to see how different stallions produce at the farms.

This photo is taken right after the auction at Janów Podlaski in 1996 when I walked with a dear friend over to the pasture where the old mares were kept and we spent some time with Parma (Aswan x Pokaznaja), Karawana (Probat x Karabela) and Europa (Bandos x Eunice). Europa had a grey colt at side named Euryk by Eldon. It was the perfect ending to our day to spend it with this group of mares!

Europa was born in 1975, a year that several great horses were born at Janów Podlaski like Etruria (Palas x Etna), Fantastka (Palas x Fanza), Pilarka (Palas x Pierzga), Arra (Bandos x Arba) and the stallions Enos (Bandos x Enora) and Ernal (Palas x Engracja). Imagine to have walked the pastures at Janów that summer, watching those foals that would become so important for Janów and Polish breeding!

Europa´s daughters have been very good producers and Euzebia (by Palas) and Elekcja (by Etogram) are still a part of the Janów broodmare band, although Elekcja is on the 2012 Pride of Poland list as a great opportunity for someone who wants to add the blood of Europa into their program through a direct daughter of hers. Elekcja is the dam of the black Elwinga (by HS Pirandelo), owned by Lutetia Arabians in France. Elwinga has been Junior Champion Filly in Belzyce and in 2011 she was the Senior Silver Champion Mare at Haras de Lamballe in France.

Euzebia was like her brother Europejczyk a winner of the Porównawcza/Comparative Stake at the Race track. Euzebia is the dam of the beautiful Epruwetka (by Eldon) owned by Halsdon Arabians and a valued broodmare with a great showrecord.

Europa belongs to the celebrated Sahara db damfamily and her dam Eunice (Comet x Epigona) made a great impact on the Polish breeding. Eunice´s daughter Eufonia (by Doktryner) was picked as one of the foundation mares at the Kurozweki stud and would turn out to be the Queen of the farm. One of the most beautiful Probat-daughters was out of Eunice, the chestnut Euterpe – the dam of Polish National Junior and Senior Champion Eula (by Arbil) and Eutona (by Etogram) – Director Trela´s favourite mare and the dam of Polish Chief sire Eurykles (by Emigrant). Eunice´s sons Eunizar (by El Azrak) and Euros (by Etap) both found their way to USA.

But it is with Bandos that Eunice produced her most famous offspring and together with Europa the most celebrated is Eukaliptus – a stallion that made a great impact through his spectacular daughters and he was himself one of the most charismatic horses I have had the pleasure of meeting. He would truly enchant anyone that met him! Euben and Euni (both by Bandos) created their own dynasties in Germany and Australia respectively.

I saw Europa on several occasions, but the memory I cherish the most of her is that afternoon when the sun slowly went down in the horizon and the only sound we could hear was the mares eating. And that was a perfect way to sum up what the whole weekend had been about –the mares, the valuable mares!

One Reply to “Polish mares – Europa”