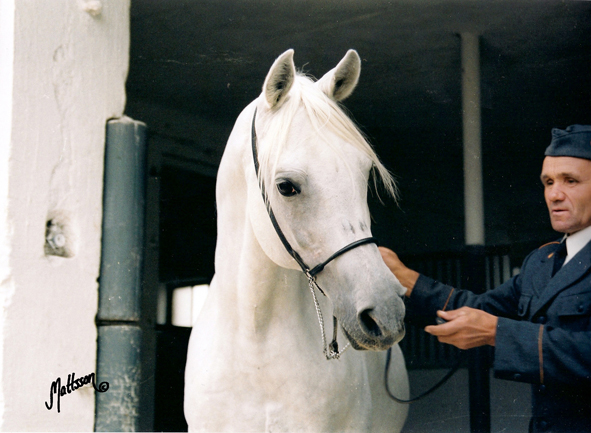 It was a warm and sunny day in September 1989 and I was for the first time at Kurozweki, one of the four State Studs of Arabian Horses in Poland. I was 19 years old at the time and it was my first trip to this amazing country with the illustrious history of their Arabian horses. Kurozweki was a favourite farm for many Swedish breeders and I have had the priviligue to work with several Kurozweki-bred horses so it was with great anticipation that I walk through the gate and toward the first barn. I knew exactly which horses I wanted to see and I was well aware of that I was about to see two legendary stallions, Palas (Aswanx Panel) and Eukaliptus (Bandos x Eunice).

It was impressive to see Palas and I can say that I had never seen a horse like him. Palas was 75 procent of Egyptian Blood and you could tell by looking at him, he was very classic. He had a beautiful head with a great expression and he was very sweet. Palas was not the most correct stallion but he was an amazing producer. Little did I know that this would be the first and the last time I would see this legendary stallion as he was sold to Brazil in 1990 and unfortunately died not long after his arrival. Palas had more than 200 offspring in Poland and his impact on the breeding has been huge. In the 80´s I remember how many Swedish breeders of Polish Arabians was trying to get some Palas-blood into their own breeding programmes but his offspring were highly valued and many found their new owners in America. I have myself had the great honour to work with some of his direct offspring as Epopeja (out of Eskapada/Nabor), Dewocja (out of Dewiza/Negatiw), Etheria (out of Etamina/Ellorus) and Zadatek (out of Zaduma/Bandos).

When the day was over and we drove back to Warsaw I knew that I would be back. During the years to come I loved visiting Kurozweki to see some of my favourite horses like Wizyta, Calisia, Euforia, Ejnia, Cirka and many more. After the breeding parade they always let a horse loose and some of Director Wladyslaw Guziuk´s favourite movers had the scene for themselves, like Algomej (Celebes x Algonkina) or Zawieja (Melon x Zamiec). Kurozweki State Stud ended in 1998 when the estate was brought back to the Popiel family, but the Popiel´s continued with the Arabian horse breeding at the farm and in August 2011 I returned to the farm for the first time in 16 years to see the private owned horses.