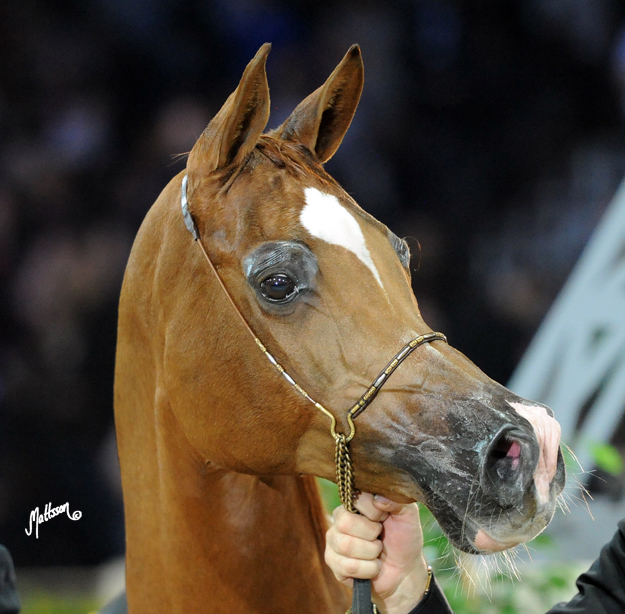 Today is the Birthday of one of the most admired and loved Arabian mares in the world. Happy 20th Birthday Kwestura! 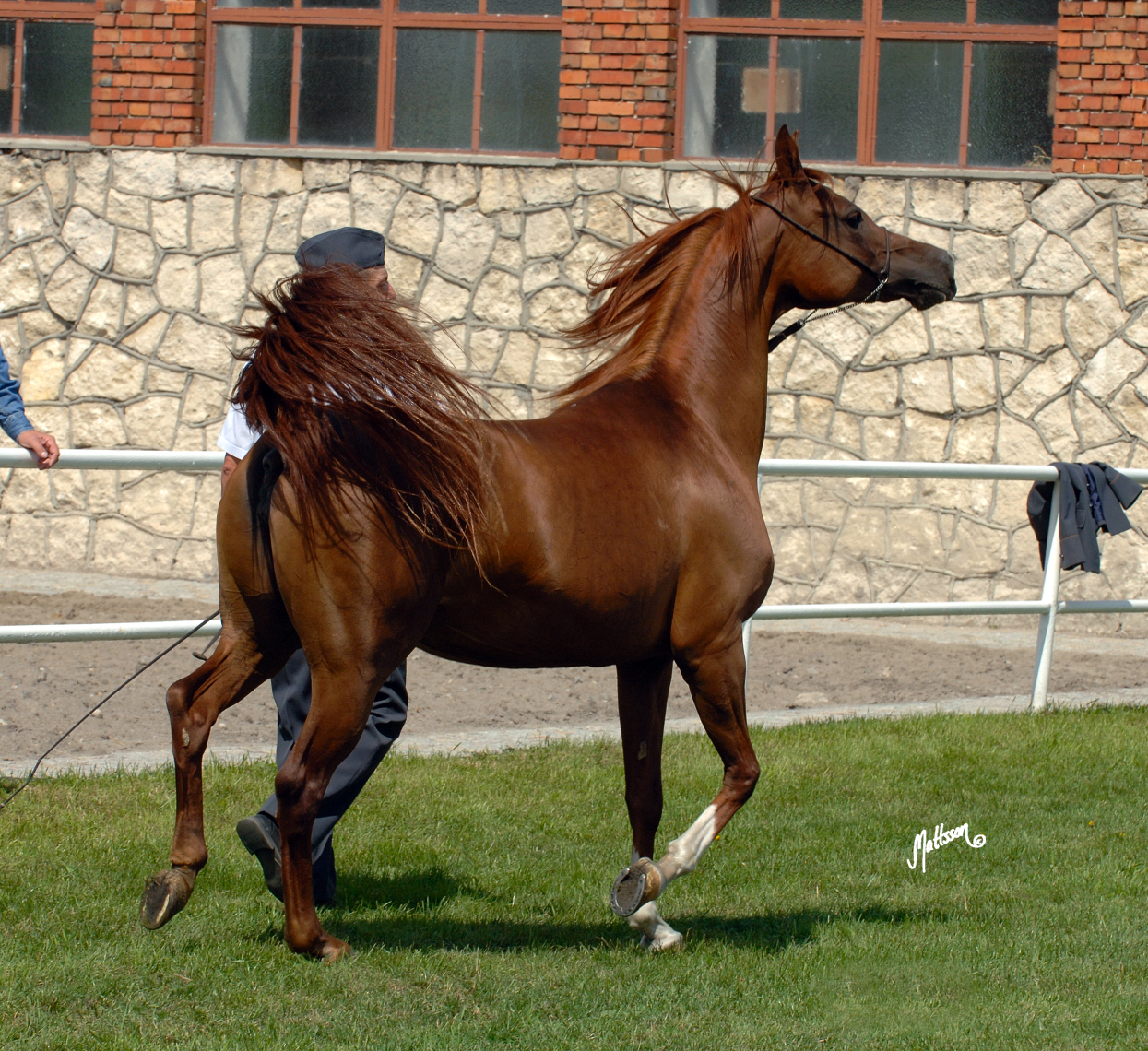 I will never forget the first time I saw this charismatic, chestnut mare – it was at the 1996 Polish National Show when she was a yearling. She was exceptional with one of the prettiest faces I had ever seen.

When Monogramm´s first foal crop was shown as yearlings at the 1995 Polish Nationals it was the first time I saw the progeny of one stallion dominate a class so heavily. Although the winner of the class (and subsequently the Champion Filly) was Janów Podlaski´s Albula (Fawor-Albigowa) the daughters of Monogramm filled up rest of the Top 5 places in the yearling class. They were impressive to see with their attitude, movements and beautiful Arabian type. Zagrobla (out of Zguba/Enrilo) was placed 2nd and she was stunning! She was named Polish National Reserve Junior Mare and I was so excited when I came for the Polish Nationals in 1996 to see her again. In the yearling class another Monogramm-daughter would capture my heart as well and this pretty, chestnut filly was Kwestura.

Kwestura won her class and was named Polish National Junior Champion with Zagrobla once again as the Reserve Champion. It was evident that Monogramm had made a huge impact on the Polish Breeding program and that we would see more of the great fillies shown that day like Ekscella, Palestyna, Fallada…

Kwestura is the third generation of Polish National Junior Champions as both her dam Kwesta (by Pesennik) and her granddam Kabala (Palas-Kometa/Elf) both have captured the same title in 1987 and 1980 respectively.

Kwesta had three daughters at Michalów and beside Kwestura she had Krynolina in 1993 (by Egon) and Karolina (by Laheeb) in 2000. Krynolina was sold to Jordan as a maiden mare while Karolina had 5 daughters and 1 son before she was sold to Russia. She was named 2013 Russian National Silver Champion Mare.

Kabala was a highly regarded broodmare as the dam of 1993 US National Champion Mare Kawalkada (by Penitent) and the UK International Reserve Champion Stallion and US National Top Ten Reining Horse Kordelas (by Monogramm).

Kwestura was shown at the Spring Show in 1997 where she was named Reserve Champion and in the fall she was sent to the Racetrack like all the other coming 3-year olds. She raced 8 time in 1998 – 1xI, 1xII, 4xIII, 1xIV, 1xV.

She was the 1999 All Nations Cup Champion Mare and in 2000 she had her first foal, a grey colt Karol by Laheeb. After he was weaned she was shown at the European Championships in Vilhelmsborg where she was named Senior Champion Mare. Kwestura was also named 2000 and 2001 Polish National Reserve Champion Mare.

In 2001 Kwestura had a daughter, Kasjopeja (by Eldon). She is still at Michalów as a treasured broodmare leaving 3 daughters and 2 sons so far.

Among Kasjopeja´s offspring is the chestnut Krasnica (by QR Marc), extremely look-alike her granddam Kwestura. She was sold at the 2013 Pride of Poland auction for 65.000 Euro to Sinus Arabian Stud in Sweden.

Mike Nichols was a great breeder and had a very good eye for horses. He leased Kwestura in 2002-2004 and she arrived in California in foal to Monar (Wojslaw-Mitrega) and had the colt Kubla Khan NA in 2002. He has been a very successful Reining horse and was the 2007 US National Champion Reining Futurity. Kwestura produced 5 foals during her lease, Kabala NA 2003 (by Millennium LOA), Karma NA 2004 (by Jullyen El Jamaal), Kashmir NA 2004 (by Bravado Bey V), Kamelot NA 2005 (by Jullyen El Jamaal) and Kassandra NA 2005 (by Baske Afire). Kwestura returned to Poland in foal to Jullyen El Jamaal and produced the chestnut colt Kwestor.

Kwestura was shown in USA and she was named Champion Mare in Columbus, Ohio and 2002 US National Champion Mare.

The Laheeb-son Poganin (out of Pohulanka/Pepton) was standing his first year breeding in 2005 at Michalów Stud and Kwestura was bred to him. She produced a very promising grey colt in 2006 and he was named Kabsztad.

In 2007 Kwestura was awarded with the World Champion mare title and she would come back two years later to win the title again, but then with a new owner.

She was offered as Lot A at the Pride of Poland in 2009 and it was clear that there would be a huge interest in the opportunity to buy one of the best mares of our time. Palestyna (Monogramm-Palestra) was the all-time high-selling lot when she was sold in 2004 for 300.000 Euro, but that record was to be broken when Sheikh Ammar Bin Humaid Al Nuaimi, Crown Prince of Ajman bought Kwestura for 1.125.000 Euro, a record that will be very hard to beat.

Kwestura was in foal to QR Marc when she was sold and she foaled a bay filly in 2009, AJ Kahayla. She has been leased to Michalów and in 2014 she had a colt, Agnat by Empire.

With a show record like Kwestura she has nothing to prove so after the 2009 World Champion title and the 2010 Senior Champion Mare in Dubai, Kwestura have lived a wonderful life in the care of Frank Spönle and Elisa Grassi in Germany. She had two foals in 2010, the colt AJ Kamanjan (by Ajman Moniscione) and the filly AJ Noor Kwestura (by Aja Justified).

In September 2014 it was announced that the Queen was coming to Aachen to show in the Senior mare class. The crowd went crazy when she entered the ring and she returned back home with the All Nations Cup Gold Champion title.

And at the World Championships in Paris she was competing with her stable mate Badawieh AA for the title World Platinum Champion and Kwestura won the title. It was such a high-light of the show to see this amazing mare in the ring, her mere presence is so amazing and it was very emotional to see her once again. 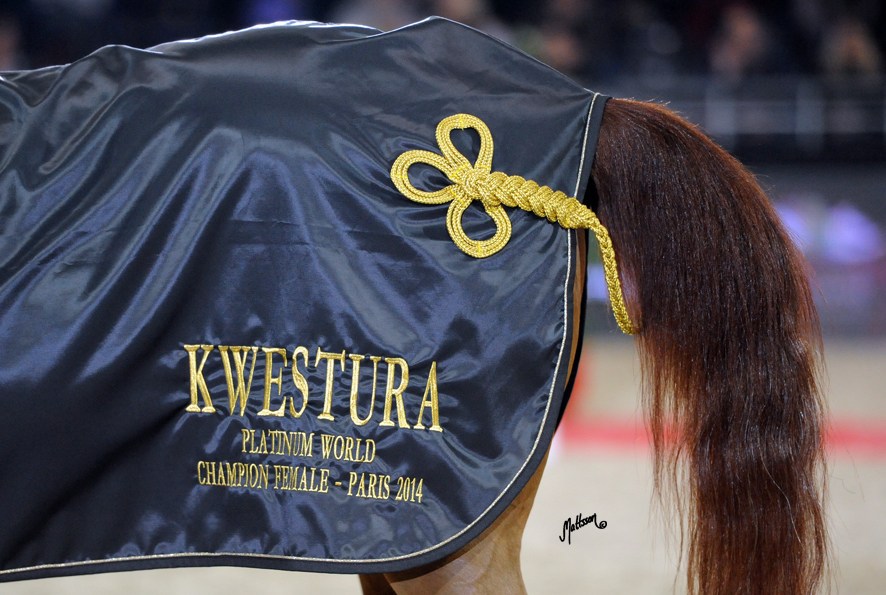 There will only be one Kwestura and I hope that she will have many years yet to come in the loving care of Elisa, Frank and everyone that works with her. Thank you Kwestura for making the world so much brighter and beautiful!