During the Arabian Insights Breeders Tour we studied in depth the importance of dam families and our participants got to see generations of mares and fillies at the three State Studs. For me the importance of the dam family is extremely high when I pick out a mare for breeding and we all have our favorite families. It might be economical impossible for a breeder to pick out a Pistoria or a Pepita at this years auction but with knowledge of the pedigrees and the mares offered you can find the mare that will be perfect for your breeding program. I want to share some photos and information about this years sale horses and I start with family I – Gazella db.

The star of the Gazella-family is without a doubt the amazing 21-year old Georgia. One of the last 7 Monogramm-daughters at Michalow and a daughter of the great mare Gizela (Palas x Gilza/Espartero). Georgia was 1 year old when I saw her the first time and she has always been beautiful with a great charisma.

She has a full-sister that is one year younger and Gehenna was sold to Australia in 2006 and she has been shown with great success in her new homeland.

Georgia raced as for 2 seasons with 15 starts (2xI, 3xII, 8xIII, 1xIV) before she was bred for the first time. She was bred to the straight Egyptian stallion Laheeb (Imperial Imdal x AK Latifa) and the result was the grey filly Galilea. She would later become the 2005 Polish National Champion Mare and 2005 World Champion Mare. 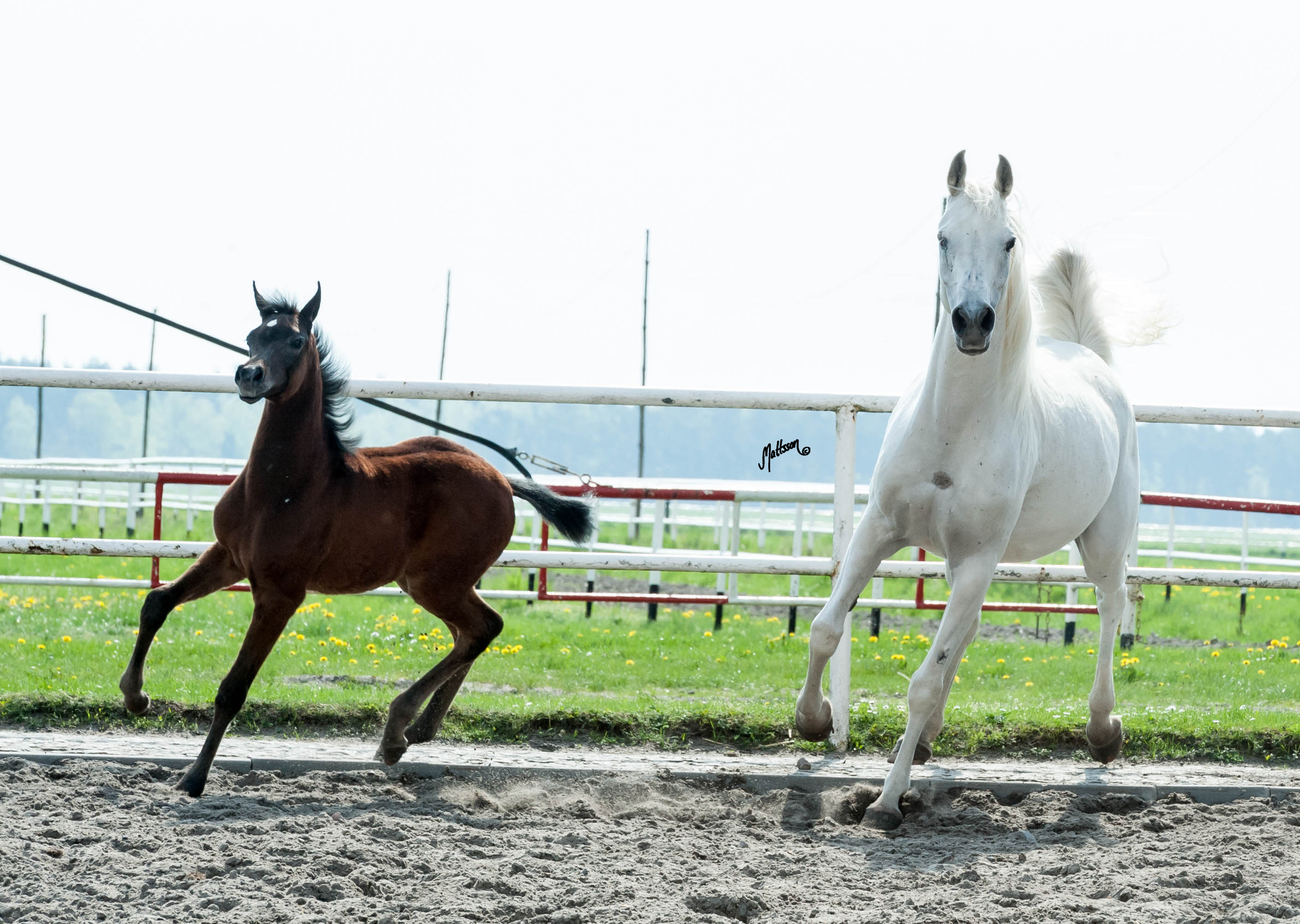 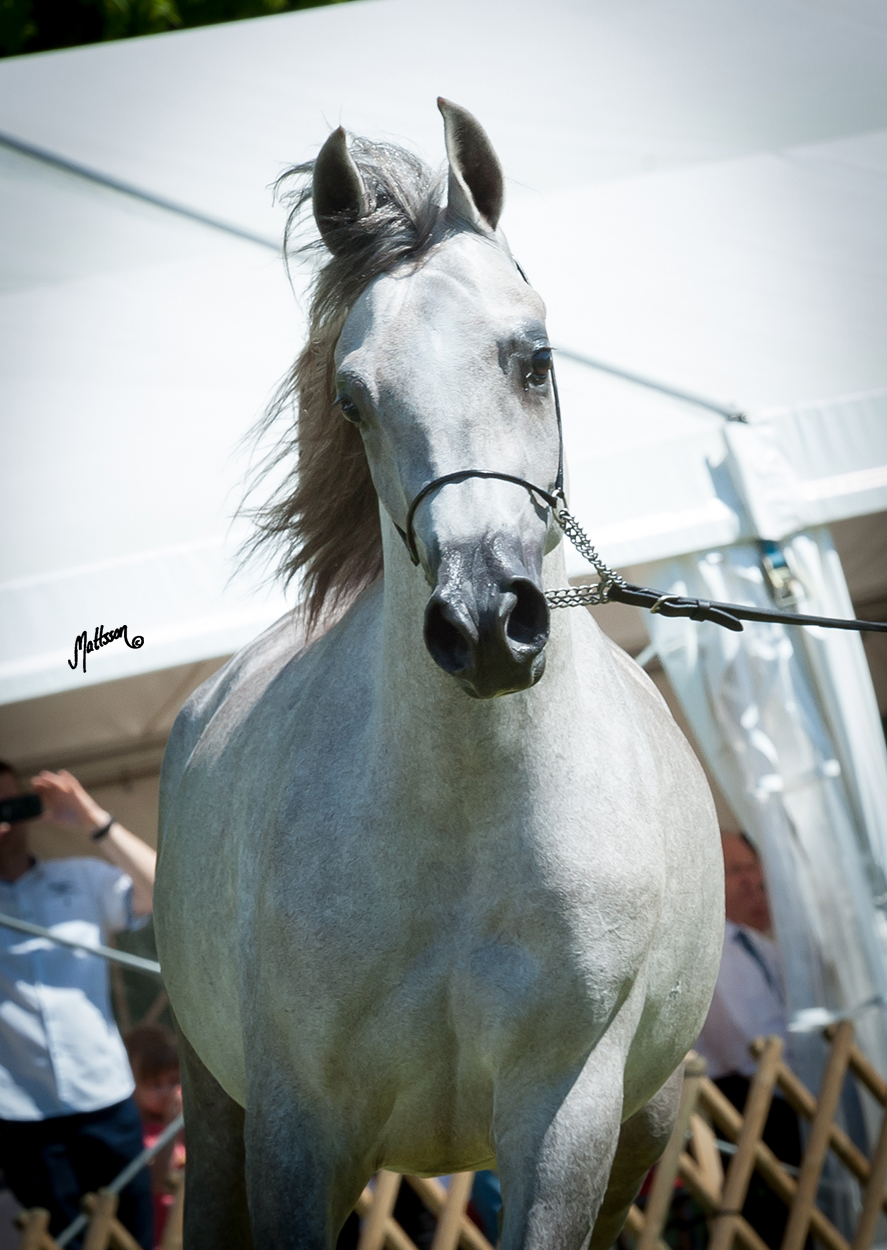 Georgia was like most of the Monogramm-daughters then bred to Werbum (Wojslaw x Werda) and produced the filly Ginerva in 2001. She was sold to a private breeder and produced the successful show-filly Ginga (by Galba). She has also been a succesful broodmare producing the charismatic chestnut colt Gotico (by WH Justice) – Bialka Spring Show Bronze Champion and Polish National Top Five Colt. Ginerva also produced Gizelda (by Ekstern), Gardens (by Eastern) and Gazir (by Ekstern) – all successful in the showring.

Another successful son of Georgia is the 2004 Gazal Al Shaqab-son Georgetown who was sold to South Africa where he has been multiple South Africa National Champion Stallion and winner in Country Pleasure, Driving, Show Hack and Costume classes.

Last year we could see Georgia´s powerful daughter Gemellia (by Piber) winning he class with 94 points at the Polish Nationals for her owners Falborek Arabians and two days later she was sold to USA. 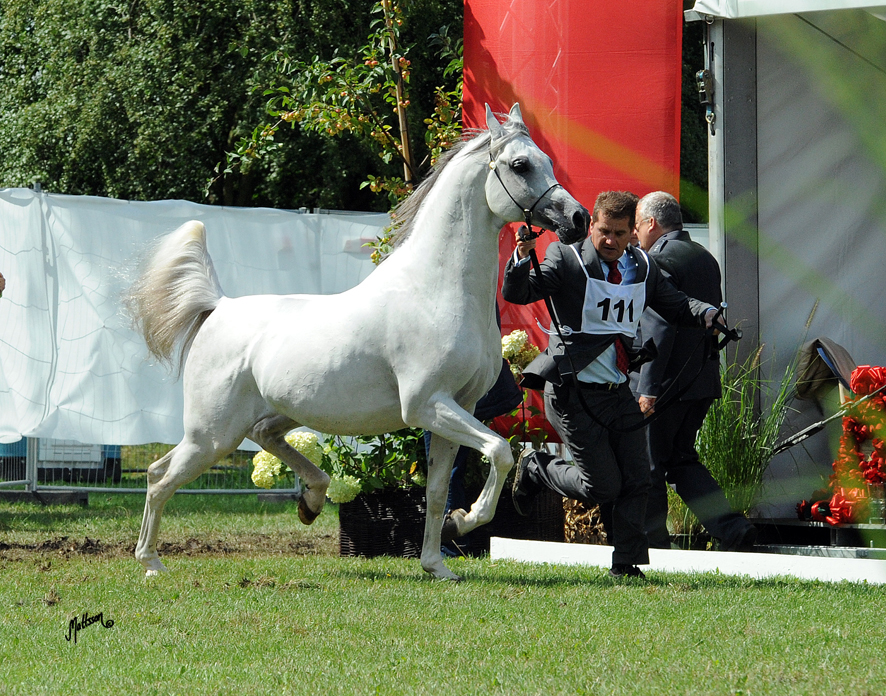 Gordion (Galba x Georgia) was also shown at the 2014 Polish National Show and he placed 2nd in the older stallion class and was awarded with a Polish National Top Five award for his owner Polska AKF Ltd. 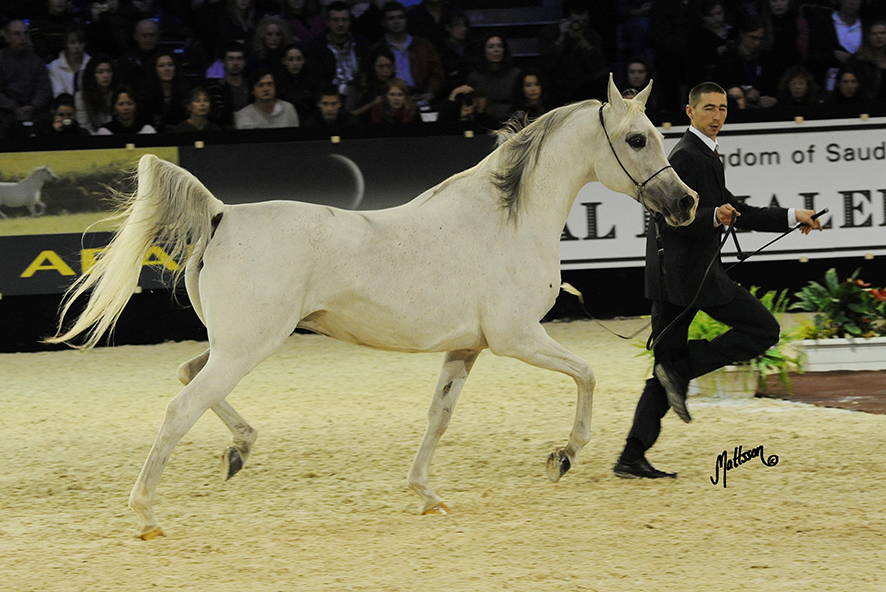 The breeder that will return home as the new owner of this amazing mare will be a very lucky person. Georgia is not only an amazing mare, she is also a great broodmare and I hope that she we will have the luxury of having her with us for many years to come and to see more of her great offspring.

Georgia is not the only mare offered from the celebrated family of Gazella through the remarkable Ofirka and her daughter Gastronomia (by Marabut), who in her turn is the dam of Georgia´s granddam Gilza. Chrynno-Palace Stud is offering one of their best mares for sale – the beautiful Emigrant-daughter Ganga. She is out of the Monogramm-daughter Granada, a daughter of 1996 Polish National Champion Mare Grenlandia (Eukaliptus x Getynga/Palas x Gilza). Ganga has been a great producer leaving one foal every year between 2009-2014 and she is now sold in foal to the successful Psyche Keret (Khidar x Psyche Victoria/Ekstern), also bred and owned by Chrynno-Palace Stud. Psyche Keret has been Elran Cup Junior Gold Champion Stallion and Breeder´s Championship Europe Junior Gold Champion Stallion in Chantilly. 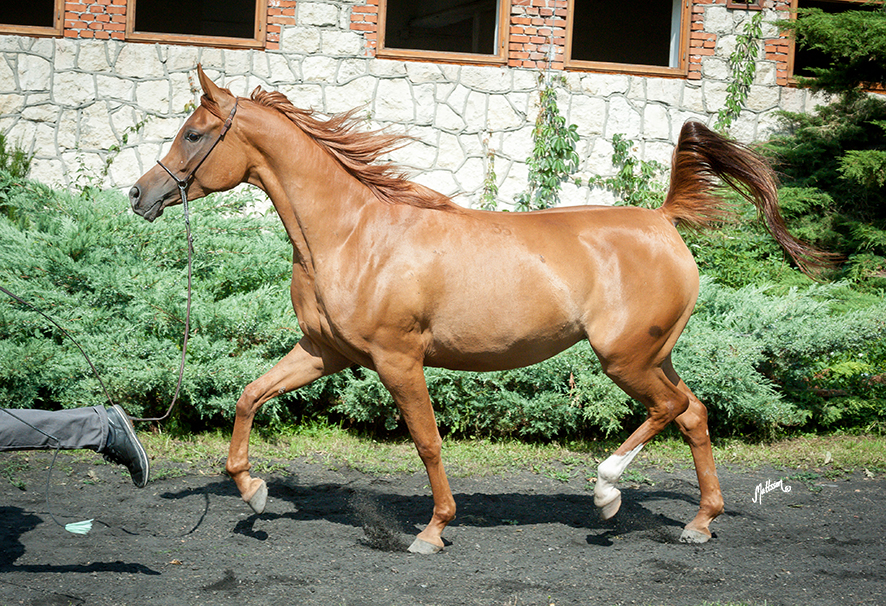 Michalow Stud offers one mare from the Gilza-family in the Summer Sale. 4-year old Galeona was raced in 2014 with 9 starts (1xIII, 3xIV, 1V). She sells now in foal to Ekstern for a 2016 foal. Galena is a daughter of 2010 Polish National Champion Stallion Alert (Piaff x Andaluzja/Sanadik El Shaklan) and out of Gasteria (Galba x Grobla/Wachlarz). Grobla´s dam Gryzetka (Wojslaw x Garonna) is a maternal sister to Ganges.

Gazella db. was one of three foundation mares with Mlecha d.b. and Sahara d.b.) imported in 1845 by Juliusz Dzieduszycki to the stud in Jarczowce. Gazella is represented through several strains and the great stallions Wielki Szlem, Witraz, Negatiw and Comet all belongs to this dam family. The families belonging to the Gazella dam-line that we see today in Polish breeding are the G-family through Gastronomia/Gilza (tracing down to Ofirka), the M-family at Michalow through the beautiful Mitra born in 1969 (Celebes x Manilla/Doktryner – tracing down to Fryga), Polish National Reserve Champion Mare in 1980 and 1982. At Michalow we can also find the A-family tracing down to Ofirka, this family was founded by the Ofirka-daughter Adis Abeba through her Nabor-daughter Amhara and her daughter Artemide (by Chazar) – 1979 Polish National Reserve Champion Mare.

Through the Adis Abeba-strain we will find one mare in the sale, the Grafik-daughter Argolida (out of Anakonda/Monogramm x Armenia/Tallin x Artemida). She has been a very good producer and her best offspring is the filly Apolonia (by Ekstern). Argolida sells in foal to Eastern for a full-sibling to Apolonia.

It might be a little bit confusing that Janów Podlaski also has a A-family belonging to the Gazella dam line, both families trace down to Gazella II 1914 but through different daughters. The A-family at Janów is not a big family but they have gained quite some success. Angola (Palas x Andria/Bandos) was 1990 Polish National Champion Mare. She is the dam of Antwerpia (by Eternit) and she was bred to Sanadik El Shaklan and produced Andaluzja who was sold to Athbah Stud in Saudi Arabia. She is the dam of 2010 Polish National Champion Alert (by Piaff) and of the tall, elegant Anilla by Pesal (Partner x Perforacja/Ernal). Anilla is now offered for sale at the Pride of Poland after producing 5 fillies for the stud farm. Her daughter Axara (by Kahil Al Shaqab) was 2014 Prague Intercup Junior Gold Champion Mare.

One of Kurozweki State Stud´s best mares was the dark bay Banat-daughter Wiorsta (out of Wieza/Doktryner). She is represented in the sale through Wasa, a gorgeous grey mare by WH Justice and out of Waresa (Empres x Wlocznia/Borek x Wlodarka/Algomej x Wiorsta). She is bred and owned by Krzysztof Gozdzialski, Falborek Arabians and she sells in foal to Emerald J (QR Marc x Emandoria/Gazal Al Shaqab). Waresa has been very succesful in the showring as the 2007 Bialka Spring Show Reserve Champion Mare, 2011 Polska Arabia Festival Senior Bronze Champion Mare and multiple Top Five Mare at International Shows. 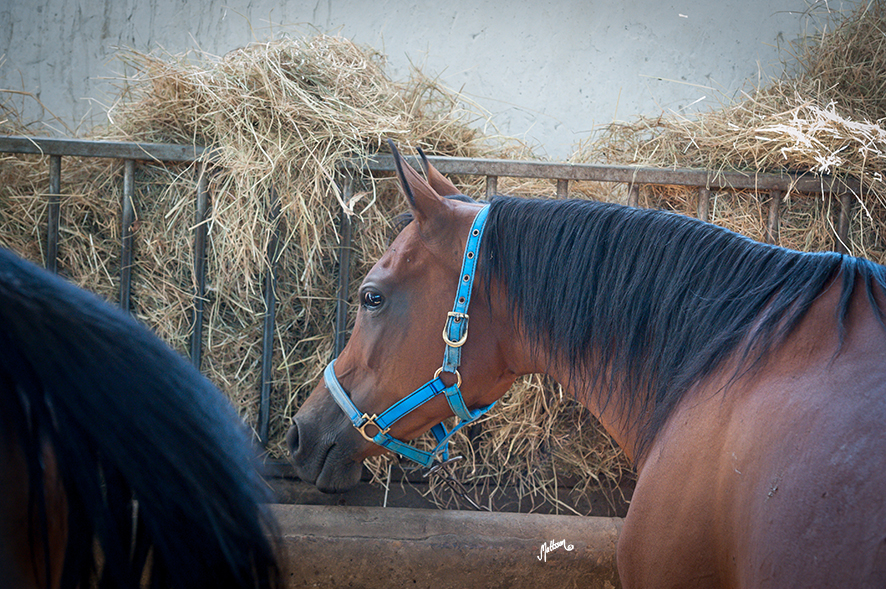 Two mares are offered in the Summer Sale belonging to the branch of the Mitra-line. Mitra was a favorite of Director Jawarowski and she was not only a beautiful mare, she was an invaluable producer for Michalow stud and it is very obvious looking at the result of the last years foal crops at Michalow.

Mata Hari is a daughter of one of the very best daughters of Monogramm – Martynika (out of Martyna/Europejczyk-Mitra).

Unfortunately Martynika was injured as a yearling so she was never shown but she gave her mother-stud some great daughters. 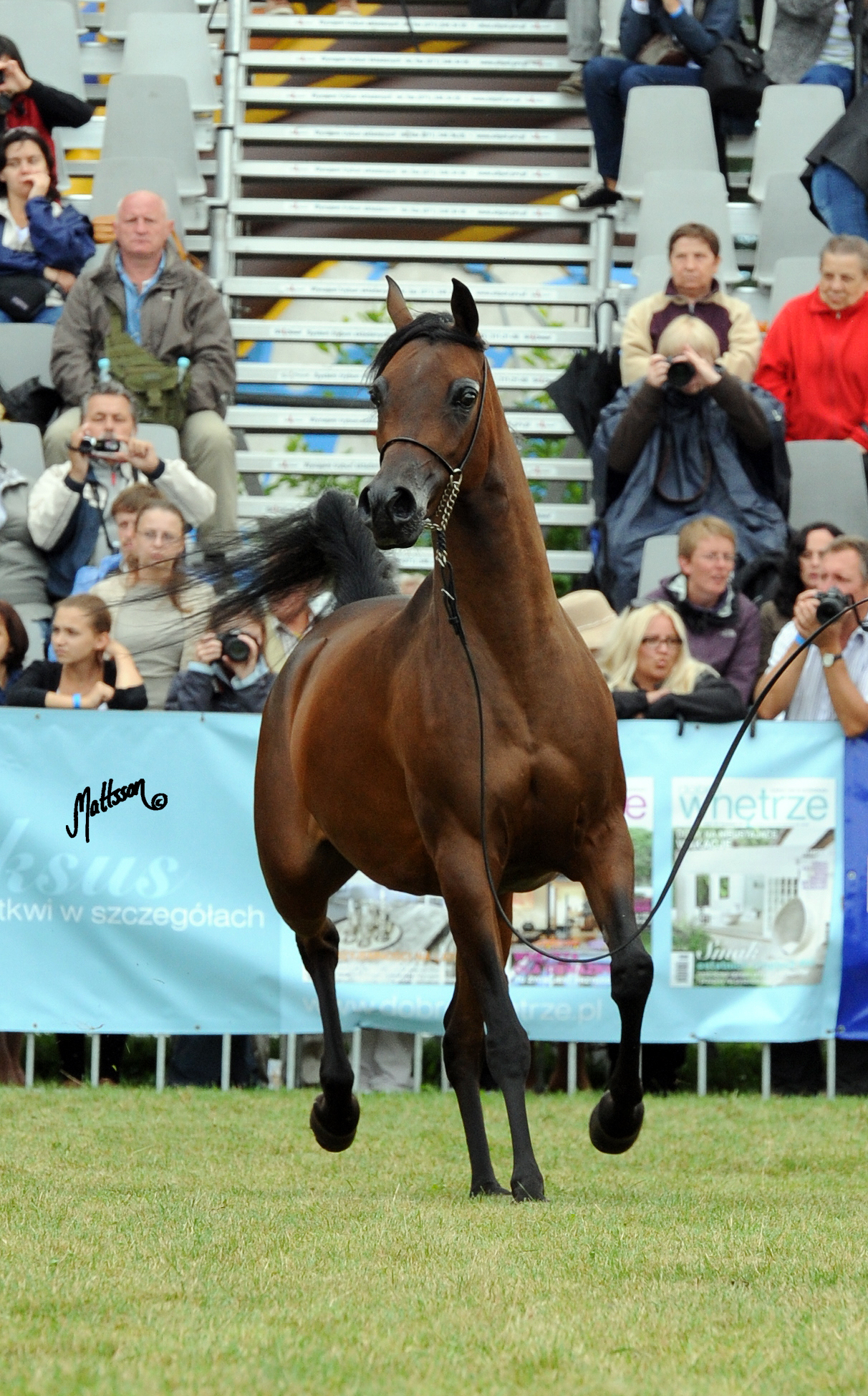 Mata Hari´s first offspring was Mesalina and she also produced the filly Mia Rosa (by Eryks) exported to the UAE, the young stallion Medalion (by QR Marc) who stands at stud for the first year at Michalow. Medalion broke his front leg as a yearling but he survived although he will never be able to be shown. Mata Hari has at her side a grey filly by Ekstern and sells in foal to Ekstern.